Eastern European foods we sampled during our trip through Poland, Russia and Ukraine had similar staples: potatoes, bread, butter, mayonnaise, snacks specifically made to go with beer and of course vodka chasers. Poles claim to have invented vodka or wodka (in Polish) as do Russians but Ukrainians have perfected the vodka experience with their best tasting pickles and variety of vodka flavors such as honey with pepper (yikes!). Many sources state that it was my people who produced vodka first in the area of today’s Russia in the late 9th century. However, in accordance with the allegations of many scholars, it had been distilled even earlier in the 8th century in Poland. Whatever 🙂

We definitely saw many similarities between the three cuisines. For instance, we had meat dumplings in each of these countries.
In Poland you will find the famous pierogi on every corner:

In Russia you will find the smaller cousin of pierogi – traditionally pork filled pelmeni (our favorite):

Still, Ukraine calls their meat dumplings varenniki, which are in between pierogi and pelmeni in size: 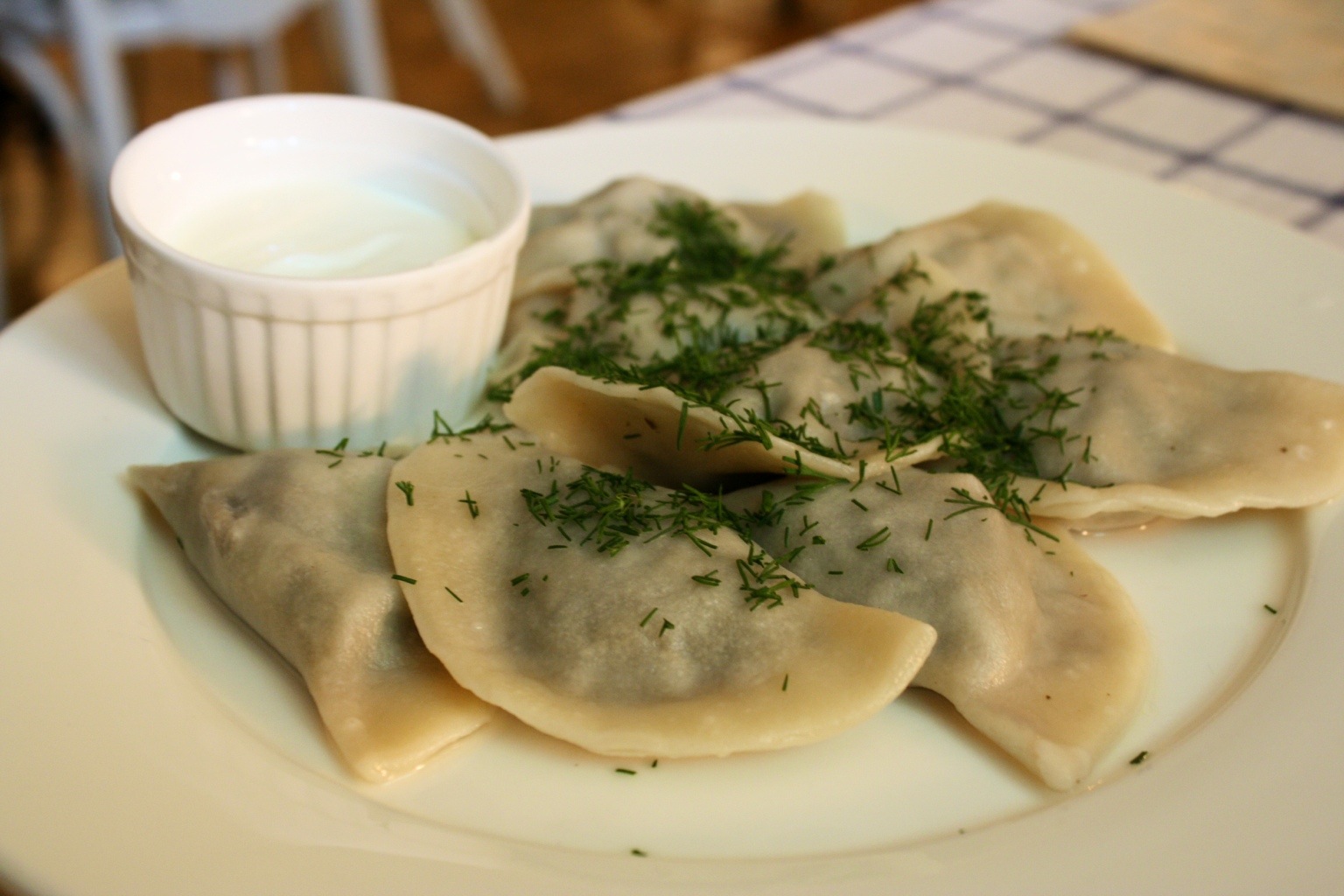 All three countries love dishes made out of beets such as the staple soup Borscht: 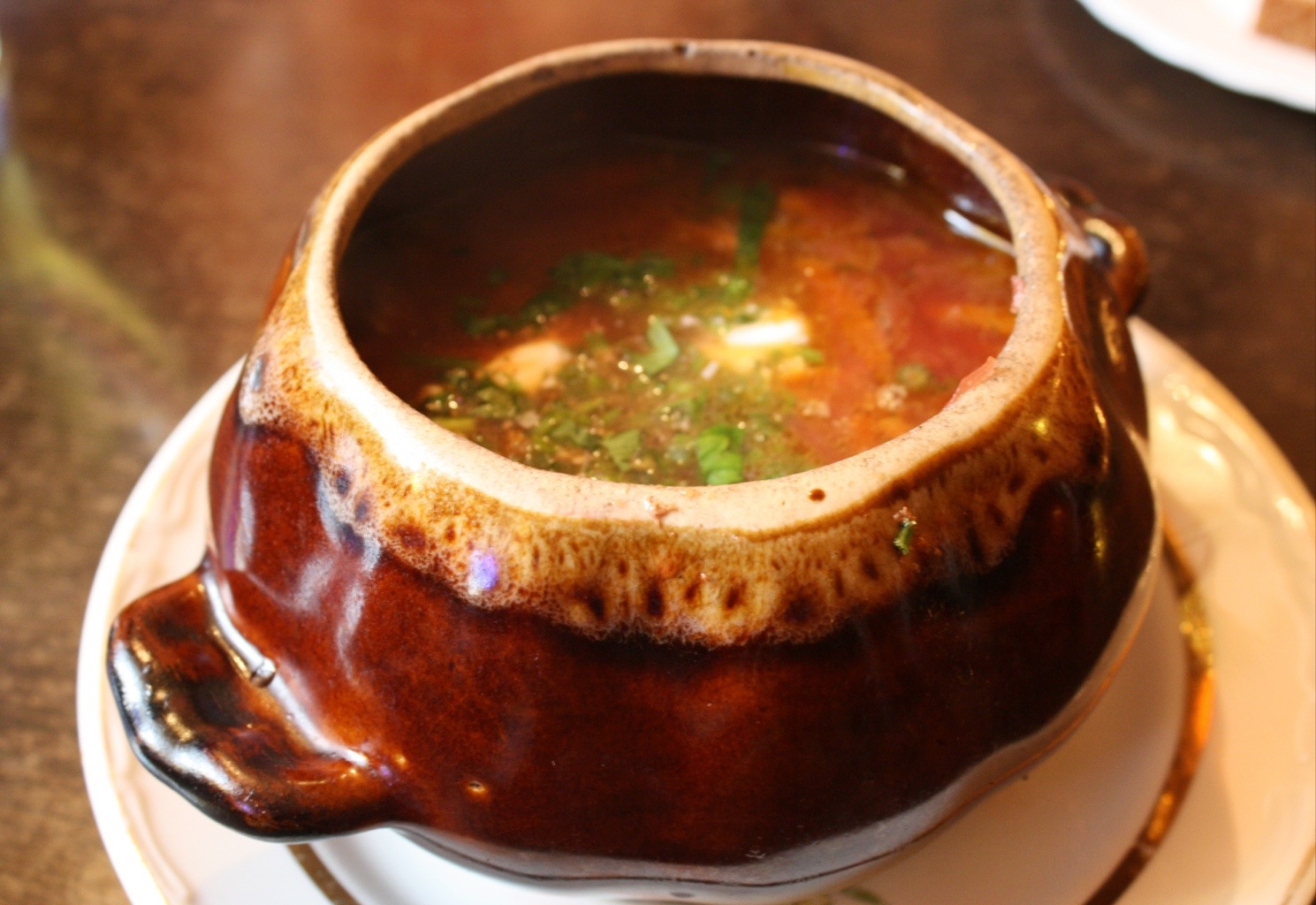 and Venegret – red salad made out of beets, peas, carrots, pickles and a couple of other ingredients that can vary by region. Though it may not look very appetizing, it’s quite tasty:

Also, all folks in all three countries enjoy their kanapki (in Polish) or buterprodi (in Russian) in the morning and as a snack throughout the day. They are simple open-face sandwiches usually with just butter and cheese, sometimes you add ham on top, sometimes boiled, sliced egg. My favorite is bread, butter, cheese and a fresh, sliced cucumber on top. 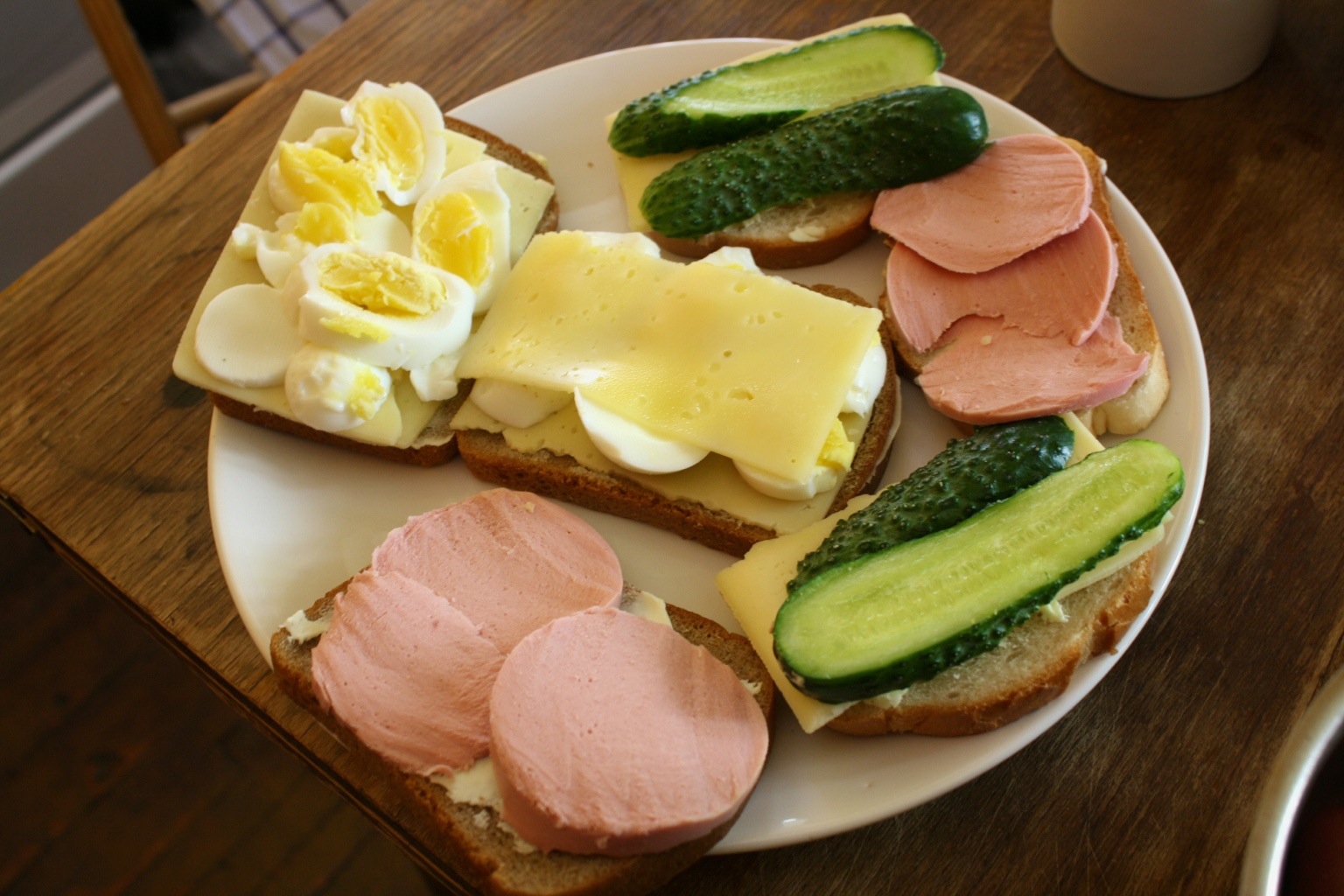 Eastern Europe enjoys its dairy. Typically you have at least one of these on the table every morning: milk, yogurt, kefir (Aaron hated this dish), tvorog, sirniki and cheese (which was rarely any good).

We tried some unique foods in each country which should give you an idea for the unique culture and flare of each region:

Poland:
Polish food is influenced by traditional German dishes unlike Russian and Ukrainian foods so you will find sausages prepared in various ways and call to be accompanied by beer. After a meal like that you can swear you are in Bavaria:

Ukraine:
We were in vegetable heaven in this country. Simple staples like tomatoes and cucumbers are so incredibly tasty that you’ll want to eat them every day, which is exactly what we did. Nearly every day we had a meal with a side of a simple veggie salad that is so quick and easy: cut up tomatoes and cucumbers, dice onion, add a bit of oil and mix everything together. We couldn’t get enough. If you’re smirking right now, you’ve never tasted vegetables in Ukraine. You won’t find tomatoes as tasty anywhere else. Though they are pretty, tomatoes in the US suck due to mutation over the years.

We also had a unique mussels-on-the-beach experience with the awesome hosts from our hostel in Odessa, their friends and other guests. The mussels were caught in the Black Sea from the breakwater near the beach and barbecued right on the beach over fire. We enjoyed great company, cold beer and fresh mussels – a true taste of Odessa.

Russia:
Aaron tried cow tongue in Russia, a dish that was a yummy delicacy when I was a kid:

As part of our Dacha (Russian summer house) experience, we tried shashlik:

It tastes the best if you eat it after Banya (Russian sauna)!

Finally, we were both excited about trying bear meat in Russia – new experience for both of us. Bear meat is a little sour for my taste but Aaron liked it quite a bit. While we didn’t see any bears in Russia (as you might expect from Russian stereotypes), we ate one. Here is a picture of pelmeni with bear meat:

And…then there are sweets. I wanted to devote a separate paragraph to sweets. As an adult I feel luke warm toward desserts and really dislike chocolate. I know – it’s weird. However, traveling back to my Motherland turned me back into a kid craving sweets I used to eat there. I ate crem brulee ice cream nearly everyday – my all time favorite. 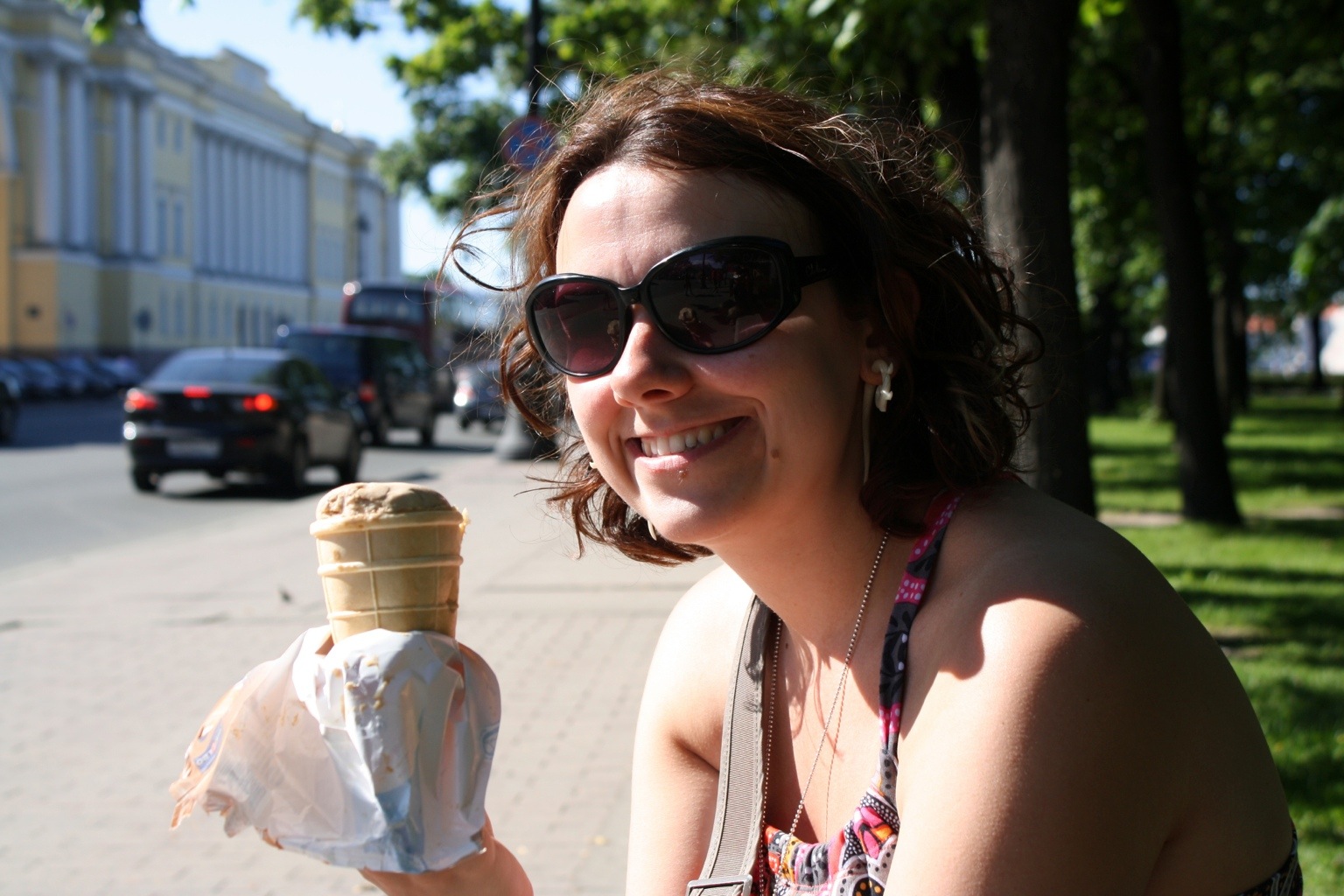 Why can’t I find this flavor of ice cream ANYWHERE else?

I also took Aaron to a Pishichnaya I remember from my childhood. What’s a Pishichnaya? That’s where they make Pishki of course – the Russian donuts. To this day I hate American donuts because I have tried Pishki as a kid. Here is me grinning from ear to ear eating this familiar treat again: 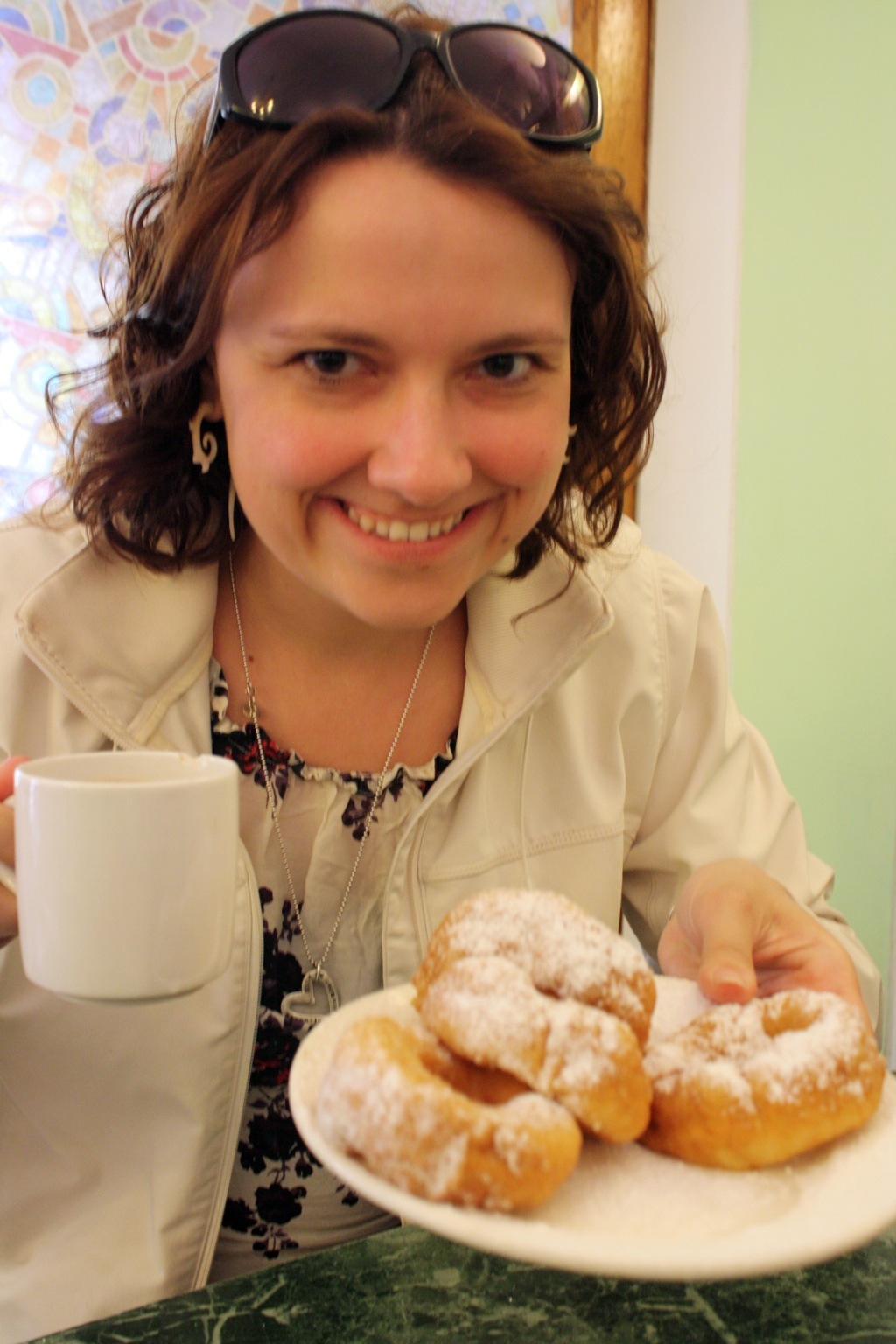 Overall we really enjoyed Eastern European foods we tried. You will be fed well in these hospitable countries. However, don’t go there looking for anything spicy. There are a couple of reasons for this: distance from the equator and communism. The closer a nation is to the equator, the spicier the food is in general so in distant Russia you’re lucky to have salt and pepper in your dish. As for communism, it should be blamed for pretty much everything. In this case they prohibited distribution of spices to the former USSR nations. We are really starting to miss spicy foods so we are looking forward to destinations in our near future that are closer to the equator and avoided soviet domination for the most part to indulge in spicy foods.