The destination that I was most looking forward to during our trip was Russia. It’s not only Lena’s birthplace, but she also has family there that I hadn’t yet met. In the time that I have known Lena, I have also slowly been learning Russian. Through Lena and her family, I feel a connection with the culture and traditions.

According to plan, we flew from Lviv, Ukraine to Saint Petersburg, Russia. We arrived at the airport, finding Lena’s aunt and cousins waiting for us – they hadn’t seen Lena since her last visit in 2004.

Lena’s aunt Galya and her close family still live in Saint Petersburg. Galya’s son Sasha is married and they have two daughters, Ksenia and Olesya. 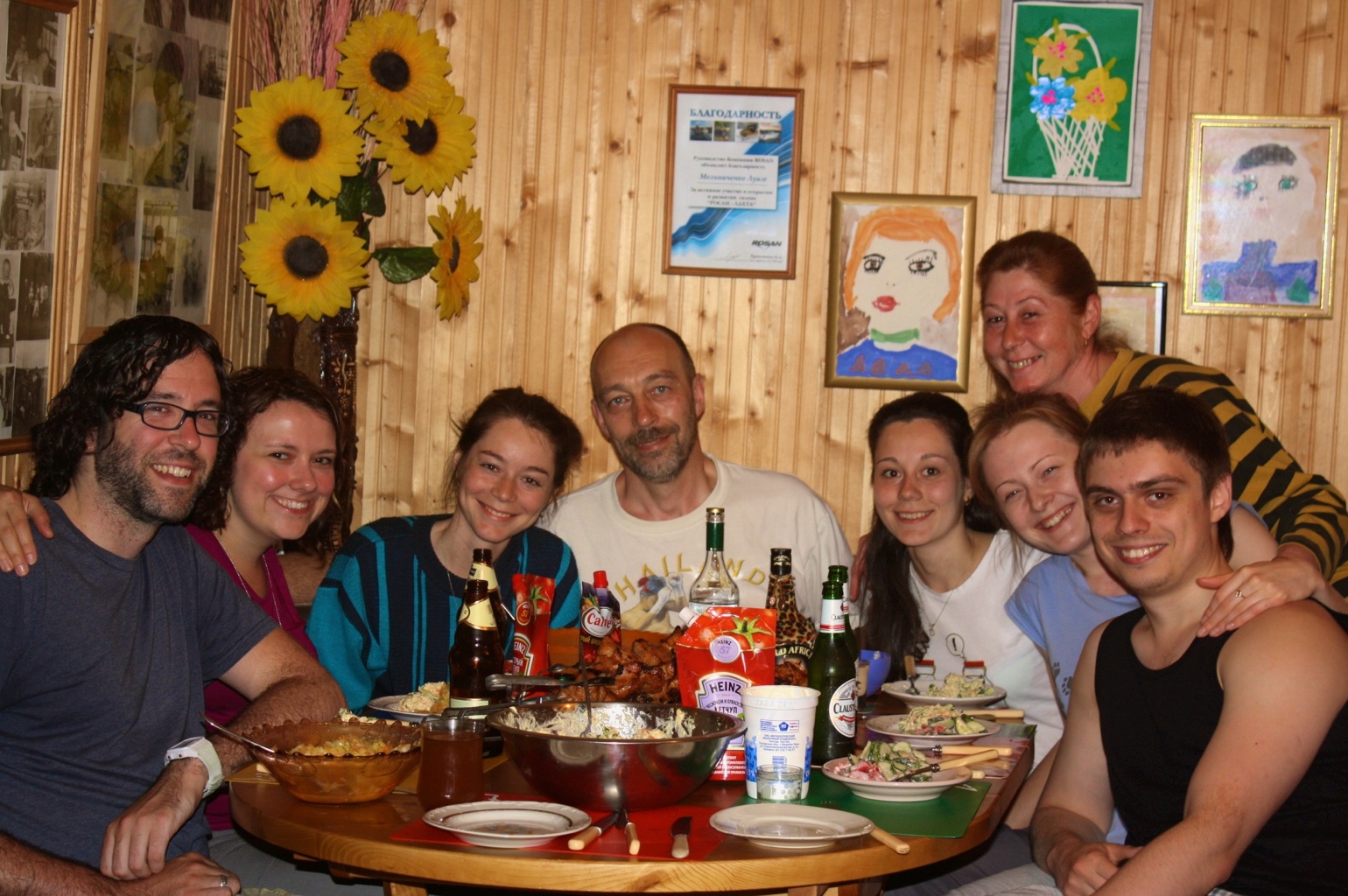 Aunt Galya determined to show me her daily workout routine:

Aunt Galya was the very welcoming, caring, and kind – she wrote me a note explaining how much she loves me. Luiza is a barrel of laughs and a great cook, Sasha is a witty, yet tough, vodka-drinking man’s man, and their daughters are friendly and fun. Even though I don’t yet speak much Russian, I feel like we all made a very good connection. It really was great to finally meet them and I am already looking forward to seeing them again.

From the airport, Sasha drove us to city center, where Aunt Galya owns a flat. She rents out the flat, but there is a special clause in the lease agreement stipulating that when family visits, the tenant has to let the family stay in one of the rooms. Only in Russia. So, we lucked out – we’d be staying downtown, a 5-minute walk to the main thoroughfare, Nevsky Prospekt.

Interestingly, there are switches and valves everywhere. Not only natural gas supply valves, but even the hot and cold water supply lines are turned off when not in use. Most electrical devices have surge protectors, yet everything is unplugged when not being used. The kitchen: 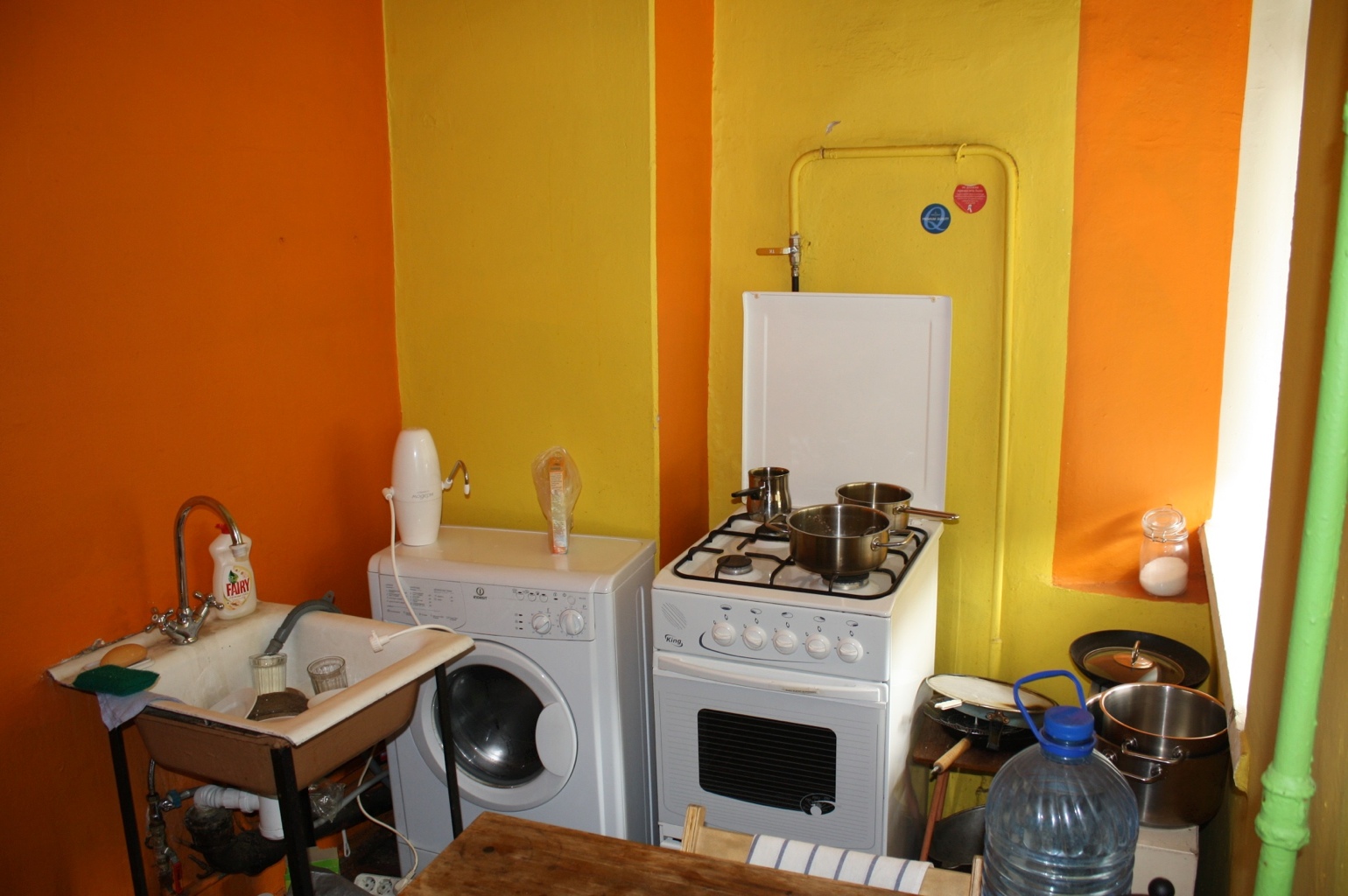 Like many cities, the flats are typically small, but efficient. Rather than talking about the size of an apartment by number of bedrooms, Russians simply count the number of rooms. This is because each room is multi-purpose – for instance, a couch typically folds out into a bed or the dining room table is folded and put away after dinner time. Our room:

Venice of the North

Founded by Peter the Great in 1703, Saint Petersburg has an extensive canal system and beautiful architecture, giving rise to its nickname, “Venice of the North”. The architecture truly rivals those of other European cities such as Paris, Rome, and Barcelona. Throughout the former USSR, buildings have been destroyed or heavily damaged and new ones were built with non-flattering, Soviet architecture. All of this exemplifies Saint Petersburg as quite a unique, european-style city.

The Hermitage Museum in Palace Square: 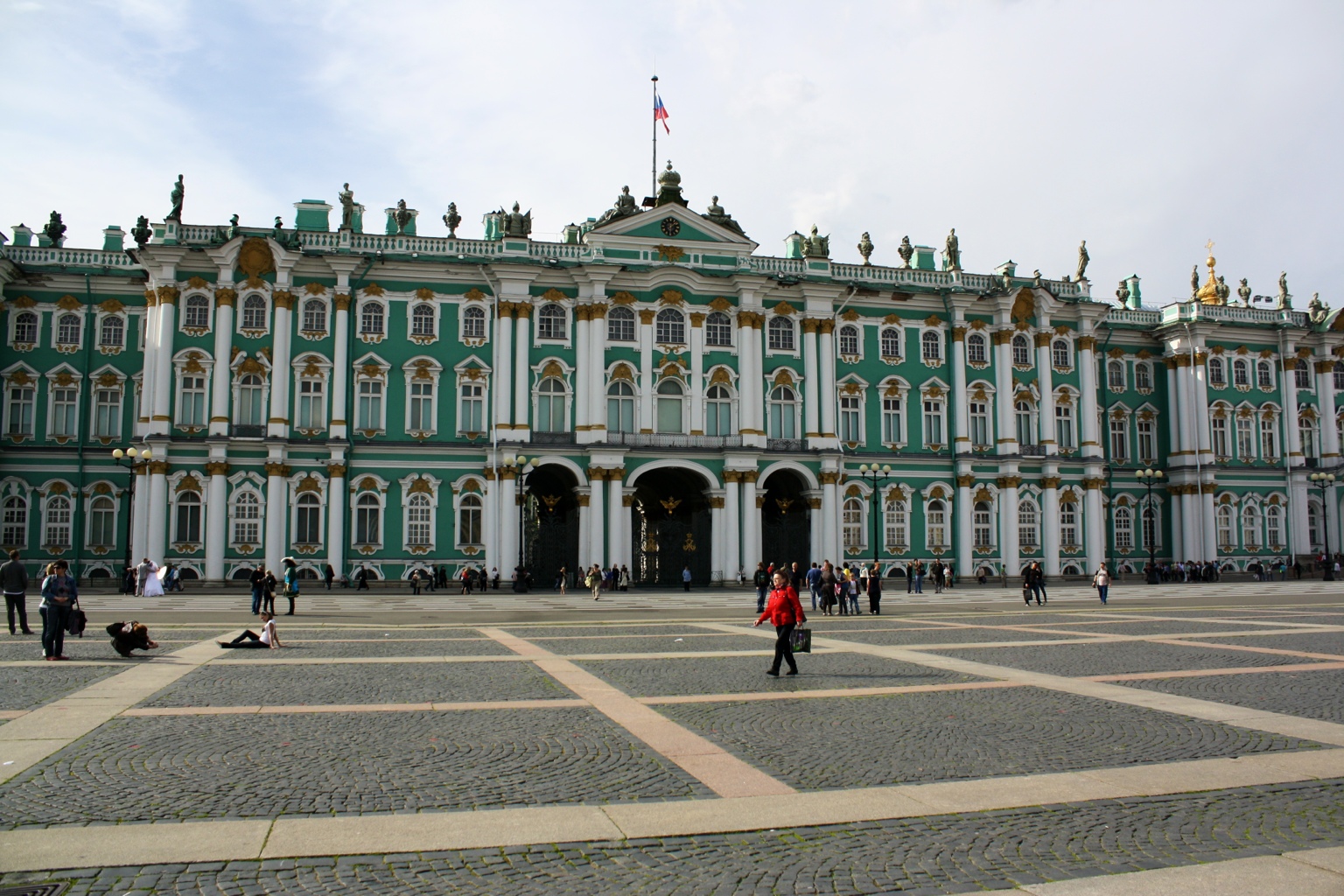 View from our cruise on the Neva River:

Even the Saint Petersburg Metro (subway) system is an architectural masterpiece. It literally takes minutes to descend to the train platform using escalators – because of the city’s unique geology, it’s the deepest in the world (by average station depth). The deepest station is a staggering 105 meters underground. Lena at the Uprising Square metro station:

The churches and cathedrals we saw in Russia were more beautiful than any I have seen. Take a look at my favorite, Savior on Blood:

The beauty doesn’t stop on the outside, the interior contains over 7500 square meters of mosaics, more than any other church in the world:

June is a great time to visit the city because of White Nights. During this period, the city experiences 20+ hours of sunlight per day. While that’s not unique to Saint Petersburg, the city nightlife is. There are just as many people out on the streets at 12 am as there are at 12 pm. 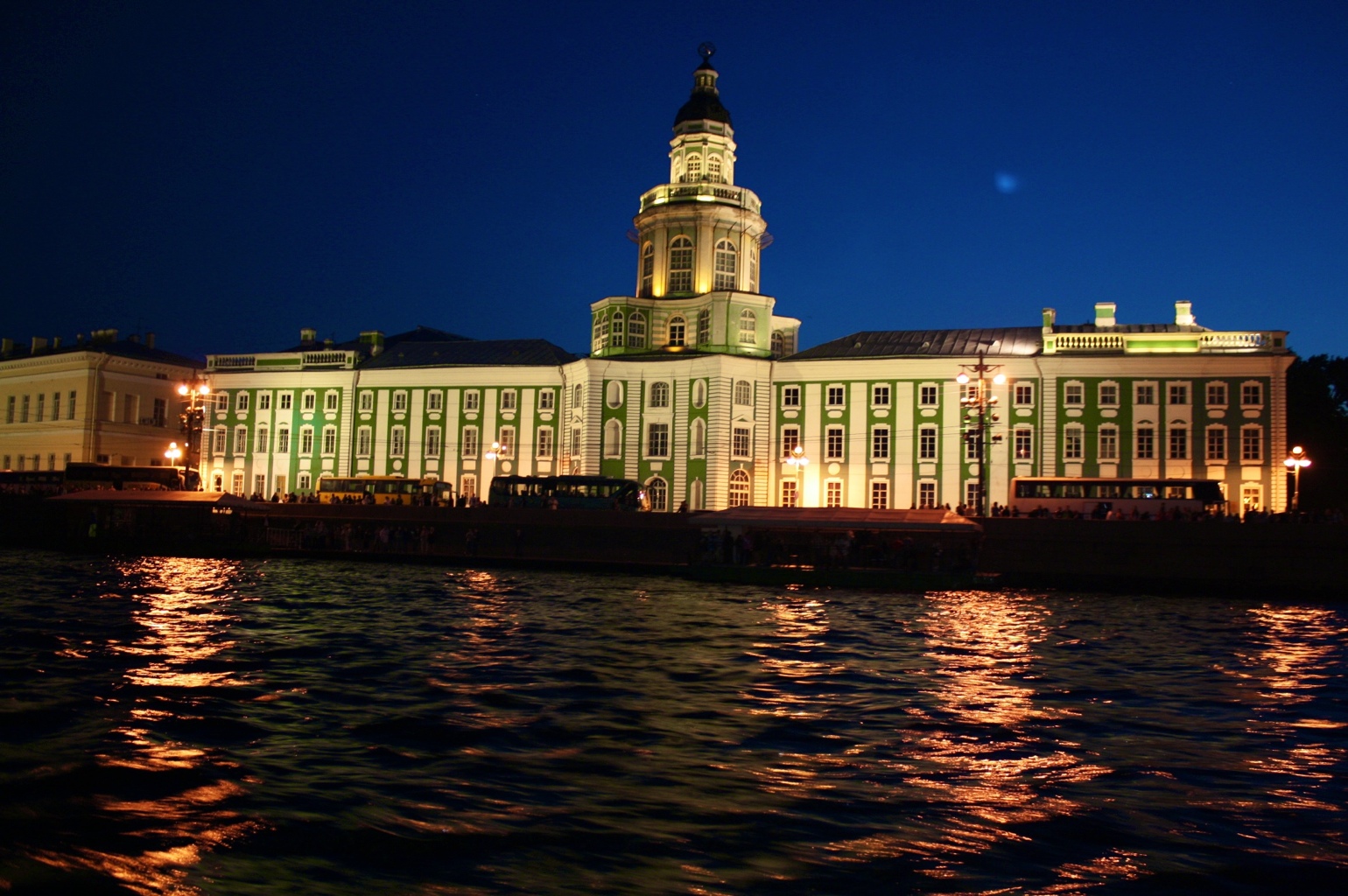 If you’re in the city during White Nights, you should take a late-night river cruise to see the draw bridges raise. It really is a sight to see – hundreds of boats swarm around the many bridges that open from around 1:30 am until around 5 am to allow ships through.

Here are a few more of my favorite stops that didn’t make it into this post, but are very much worth the visit.

The view entering Petergof from the Meteor hydrofoils:

It was great to finally see where Lena comes from. She did a great job leading me around her city and showing me what it’s all about. I’m convinced that this is the most beautiful city. There was more to see and do than we could fit in, even after two weeks in the city.

Unlike Moscow, as we would later see, Saint Petersburg has really set itself up well for tourism. Every few blocks on Nevsky Prospekt there would be several salespeople selling bus our boat tours in multiple languages.

Saint Petersburg is a really great city. It really is nothing like the “Russia” that Americans are taught to expect. In fact, Russia is quite a bit more like the US than most places I’ve been – large, powerful, and a very strong sense of nationalism. From what Lena and her family have told me, much has changed since the fall of the USSR and people are living much better lives. This brings me to one of the first big lessons I’ve learned on this whole round-the-world trip. You hear it, but it’s another thing to believe it: all people are much more alike than they think.

Aunt Galya sending us off for our overnight train to Moscow: 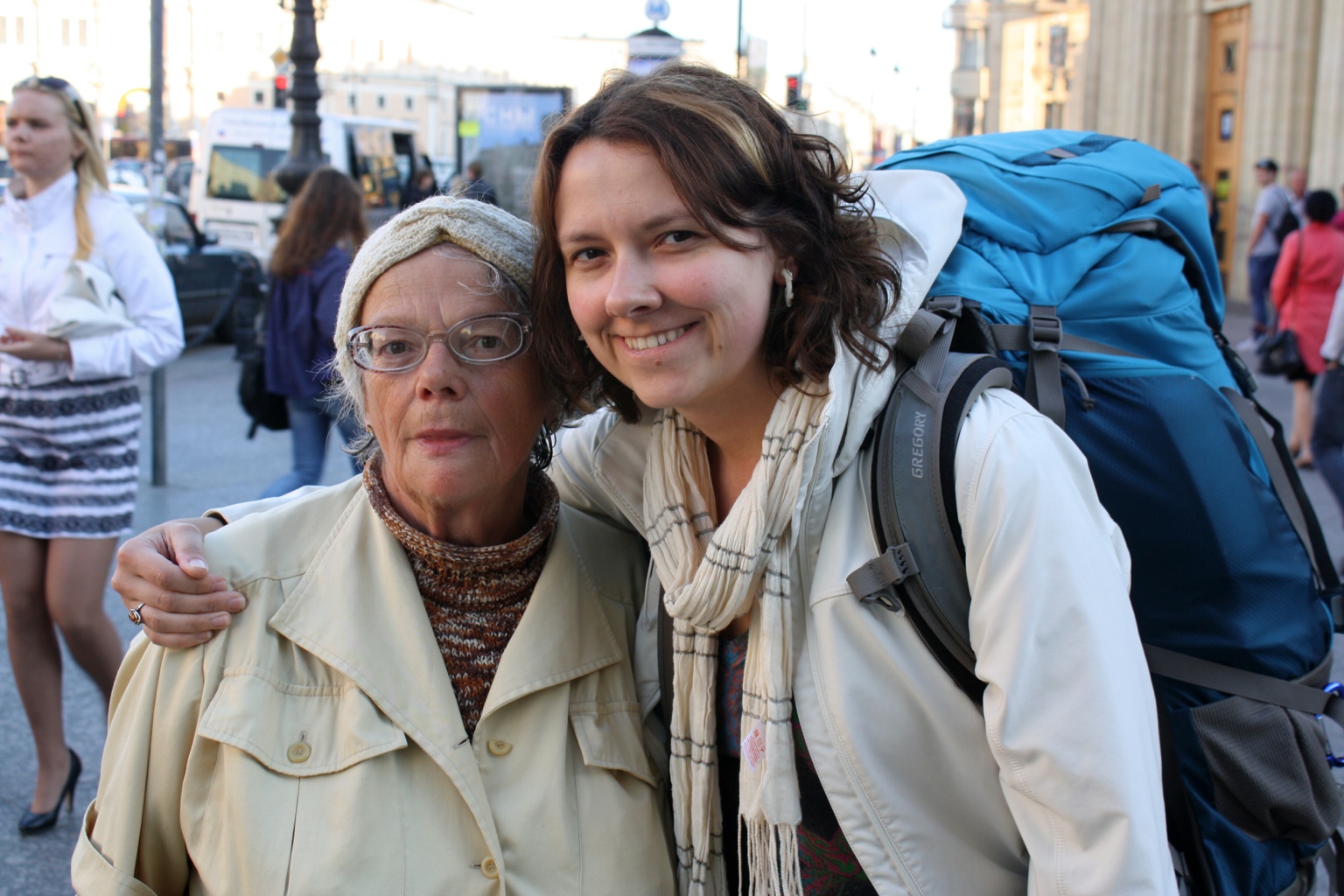 Check out all of our pictures from SPb or read more about Russian and Eastern European Cuisine.

Leave a Reply to Masha (2away) Cancel reply