Given that air travel is the most expensive part of this trip, we try to avoid it as much as possible. Also, we are always on the look out for adventure so we decided to take a ferry to get from Odessa, Ukraine to Georgia. It’s a working ferry: mostly carrying various imports, livestock and vehicles. There is room for some passengers who are mostly truck drivers traveling with their vehicles to Georgia. Clearly, we had to try to get on the boat and experience it for ourselves. Getting on it was an adventure in itself, which Aaron wrote about is his post here.

Check-in
We had to get on the ship the day before we actually sail, which was rather disappointing to us as we spent the 4th of July on the boat docked in Illichivsk port. The tedious process of passing through customs was done in the “hurry up and wait” fashion as we were lead from one boring room to another: 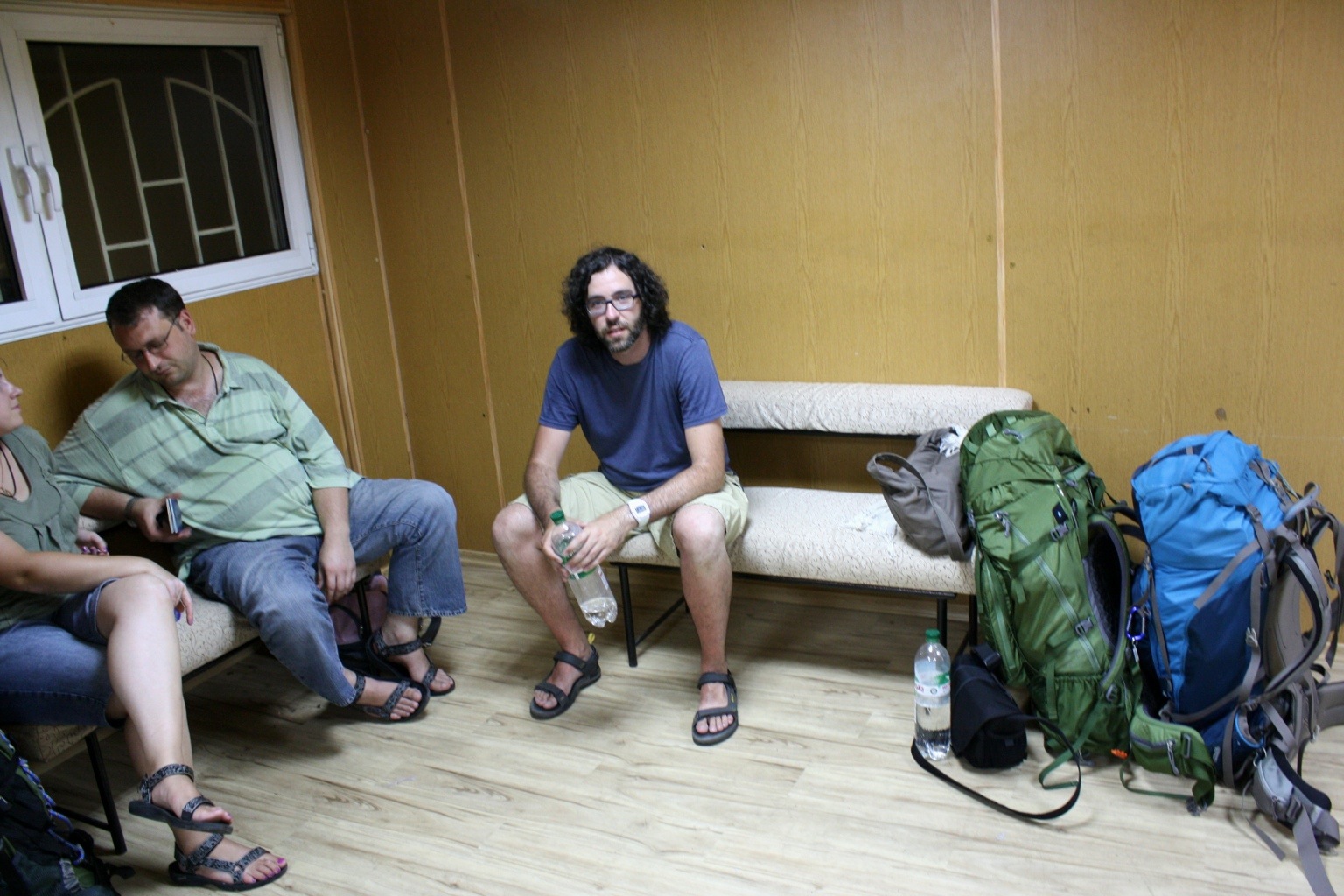 Some passengers were called by the police officers to their office only to get fined. I suspect this might be an easy way for corrupt Ukranian police officers to get bribes from truck drivers by coming up with some sort of violation. Thankfully we were left alone and after a few long hours we piled up with our backpacks and a few other passengers in a tiny mini-bus that took us to the boat. We had to climb a shaky ladder to get on the boat, which almost collapsed in the water with too many people on it right before we had to climb it, which was nerve racking when you are already hauling a huge backpack on you. Here is a picture of those stairs on the side of the boat: 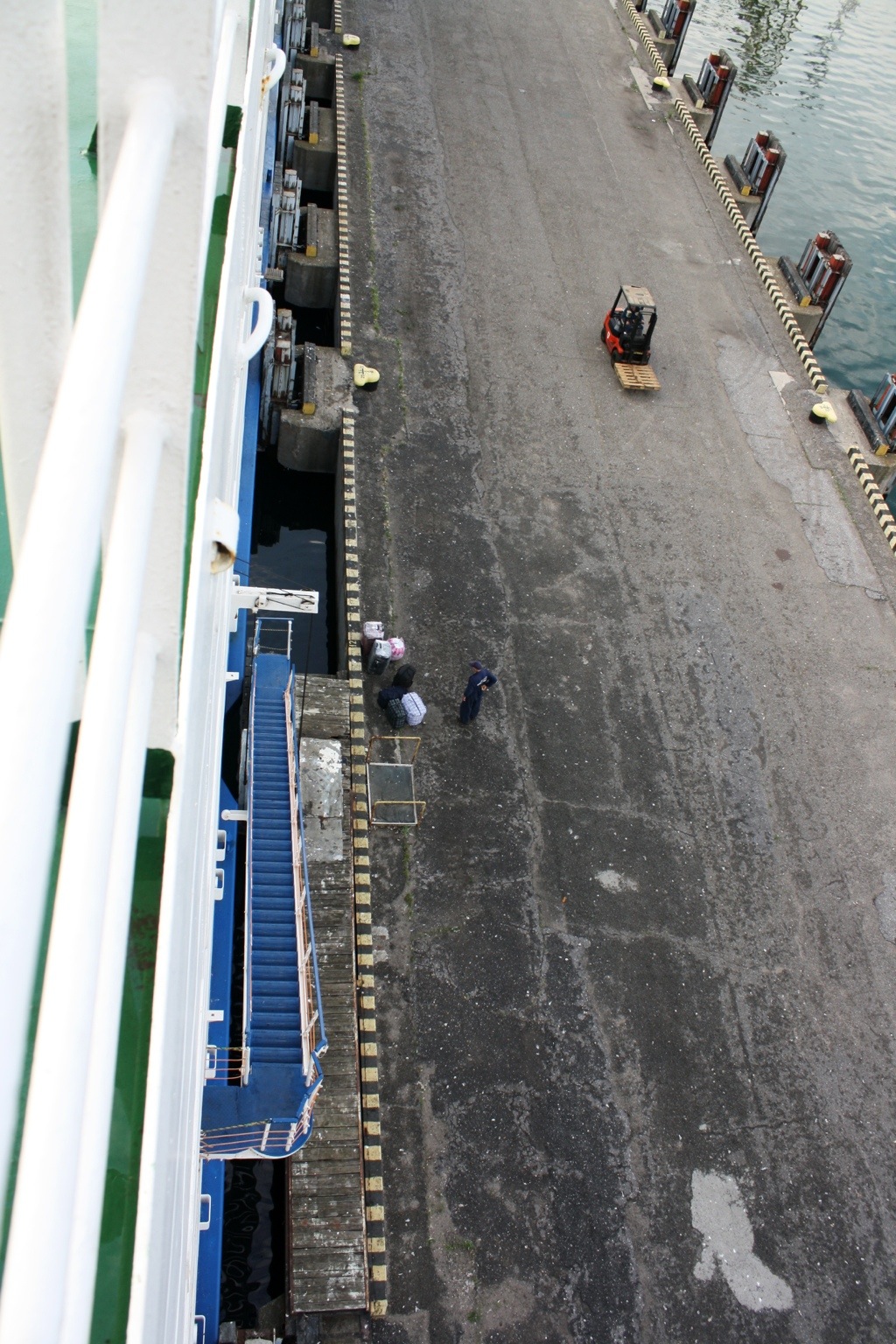 Once we were on the boat, we headed up more stairs to the reception area where we were given instructions in Russian about the location of our cabin and the assigned table number for all our meals. The importance of sitting at only your assigned table number was stressed to us several times. We actually had to bring our tickets that had our table number hand-written on them for the first meal so that cafeteria ladies could verify that everything is in order and everyone is adhering to the rules. There was a time when two truck drivers sat with us and were yelled at by the lady from the reception area because they violated the meal table rule – this was a no-no.

All these instructions were in Russian, of course, so we are very lucky that I speak the language. I had to translate to a couple of sweet German women who seemed very confused at the reception. While not impossible, this entire experience would be difficult for a non-native speaker.

Room
We proceeded to our cabin as instructed at the reception and found it to be very simple but functional and comfortable enough for us – complete with a window and an en-suite bathroom.
The hallway on the way to our room: 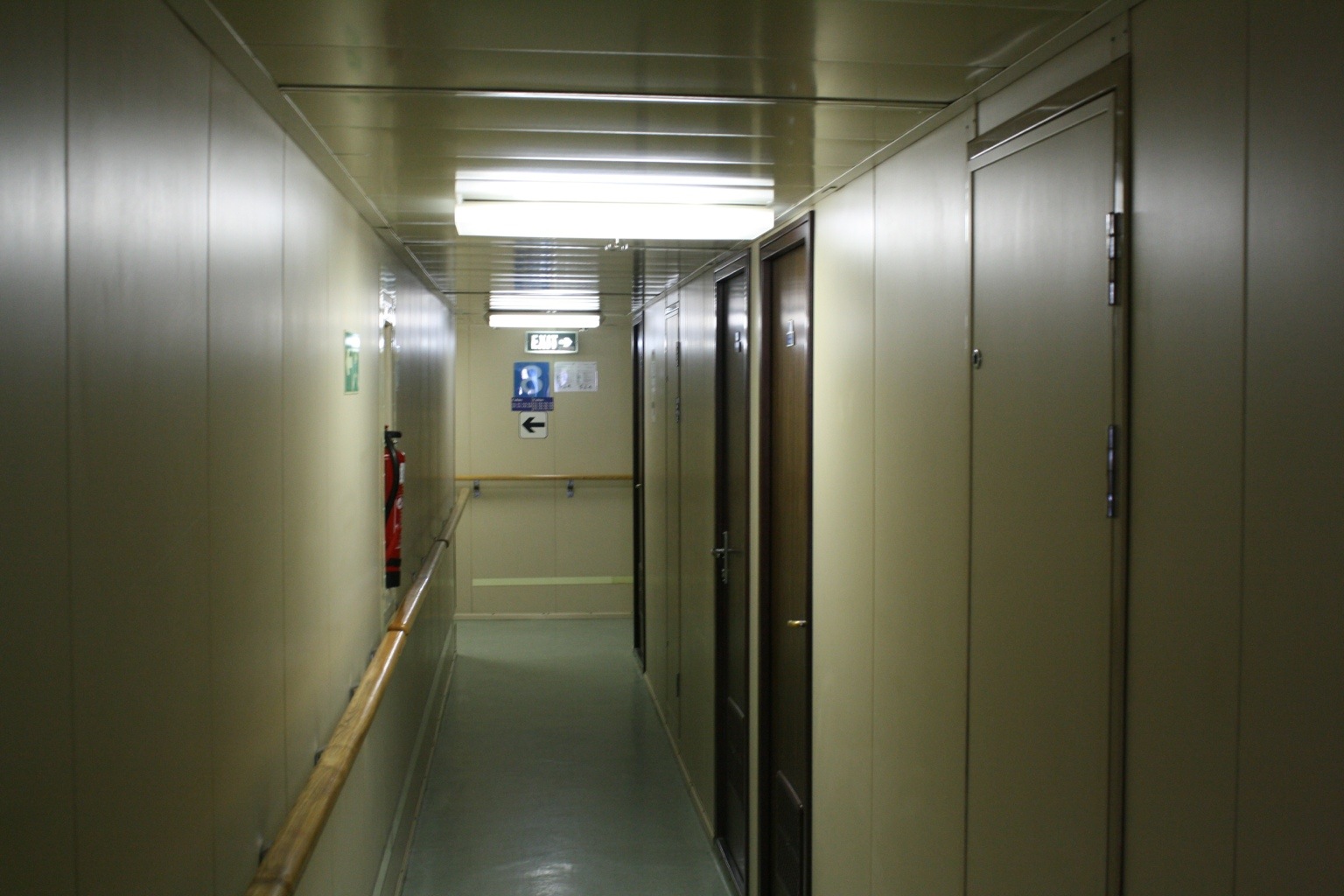 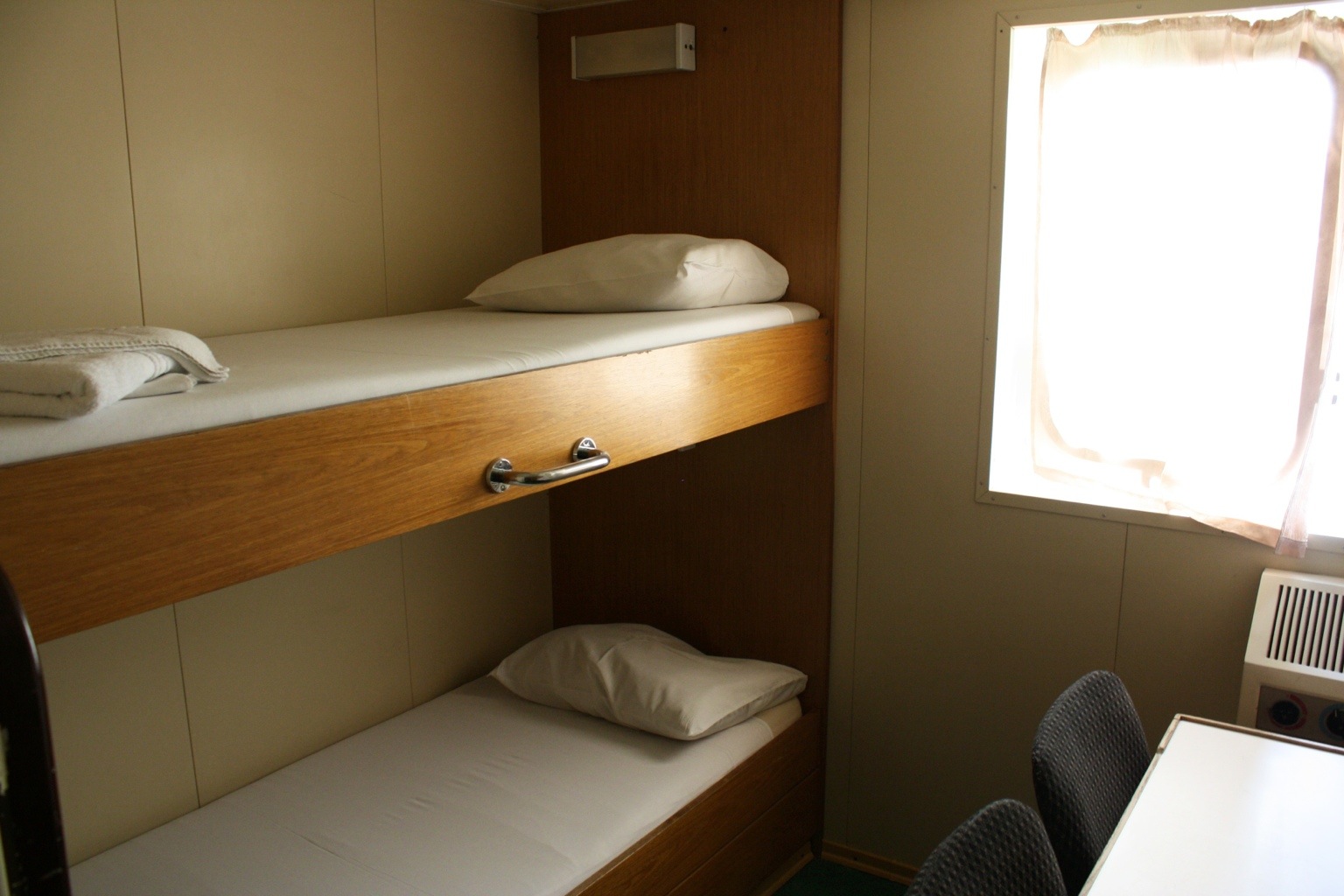 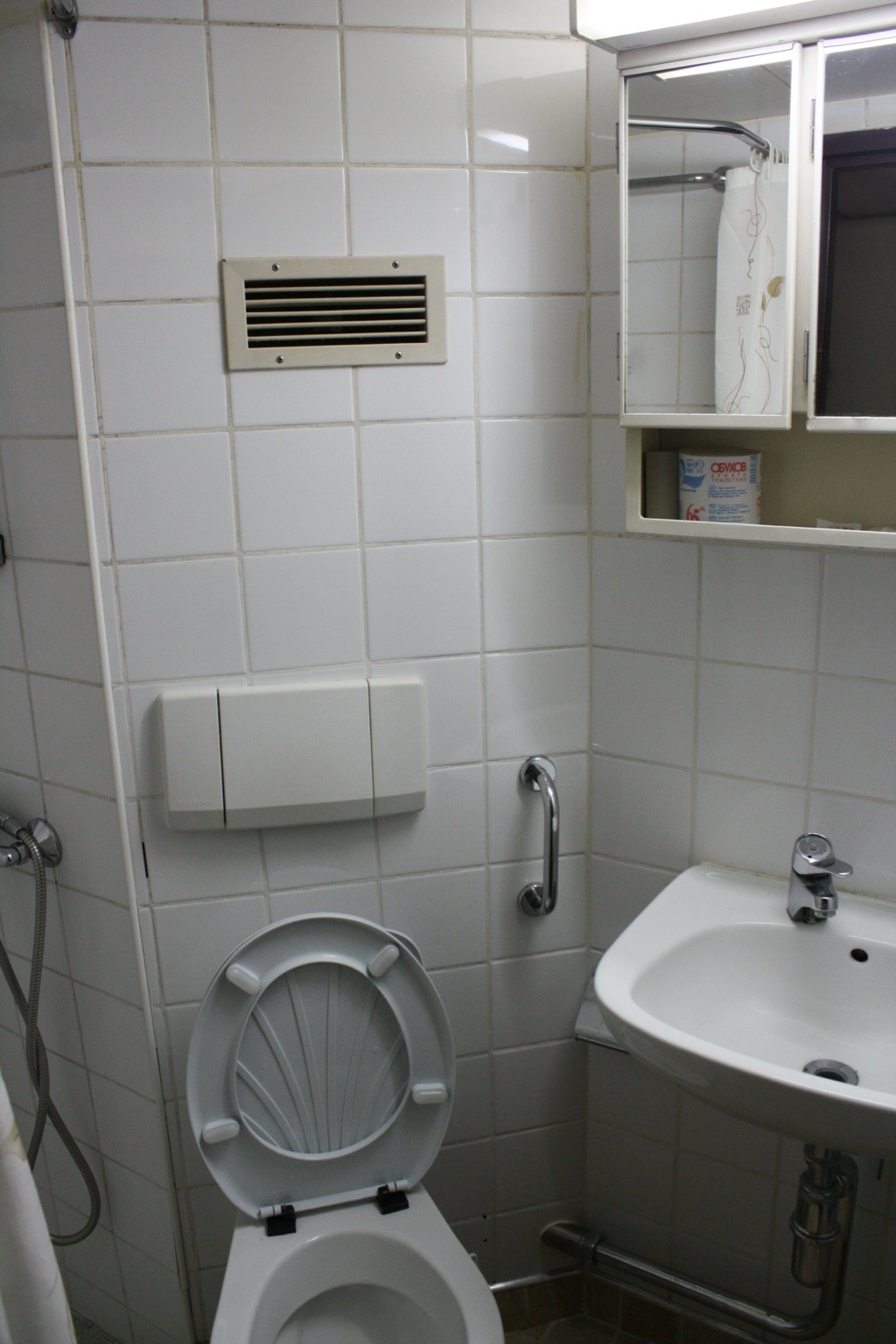 Life on-board
Our boarding was over and we quickly realized that there will be very little to do on-board, which made for long three days of getting to Batumi. There was no TV in our room and no wifi of course. There was one TV on our floor that showed Russian TV shows non-stop in poor, fuzzy quality. Nevertheless, there were constantly truck drivers without their shirts on watching them.

Given that theses truck drivers take take this route quite frequently, they all quickly figured out how to pass their time: playing table games, watching the fuzzy TV, arguing politics while smoking and drinking vodka shots of course. What were we to do? Only the last option seemed at all appealing to us…However, the bar was closed the first night since we were docked so we watched a movie we had on my iPad and went to bed.

We sailed the next day around 8am and were woken up by a loud announcement that breakfast is ready and all the passengers need to go to the restaurant. We received similar announcements for lunch and dinner. Sometimes the reception lady would try to translate them to broken English but only if she felt like it. There were also other announcements mostly directed at truck drivers about their vehicles but there was no way for us to turn the announcements off in our room even after we knew the exact times for meals.

From then on, our days would be filled with sleeping a lot, reading a lot, looking forward to the meals (the only activity on-board that everyone was excited about) and sitting on the small metal benches out on the deck enjoying the sun and the sea: 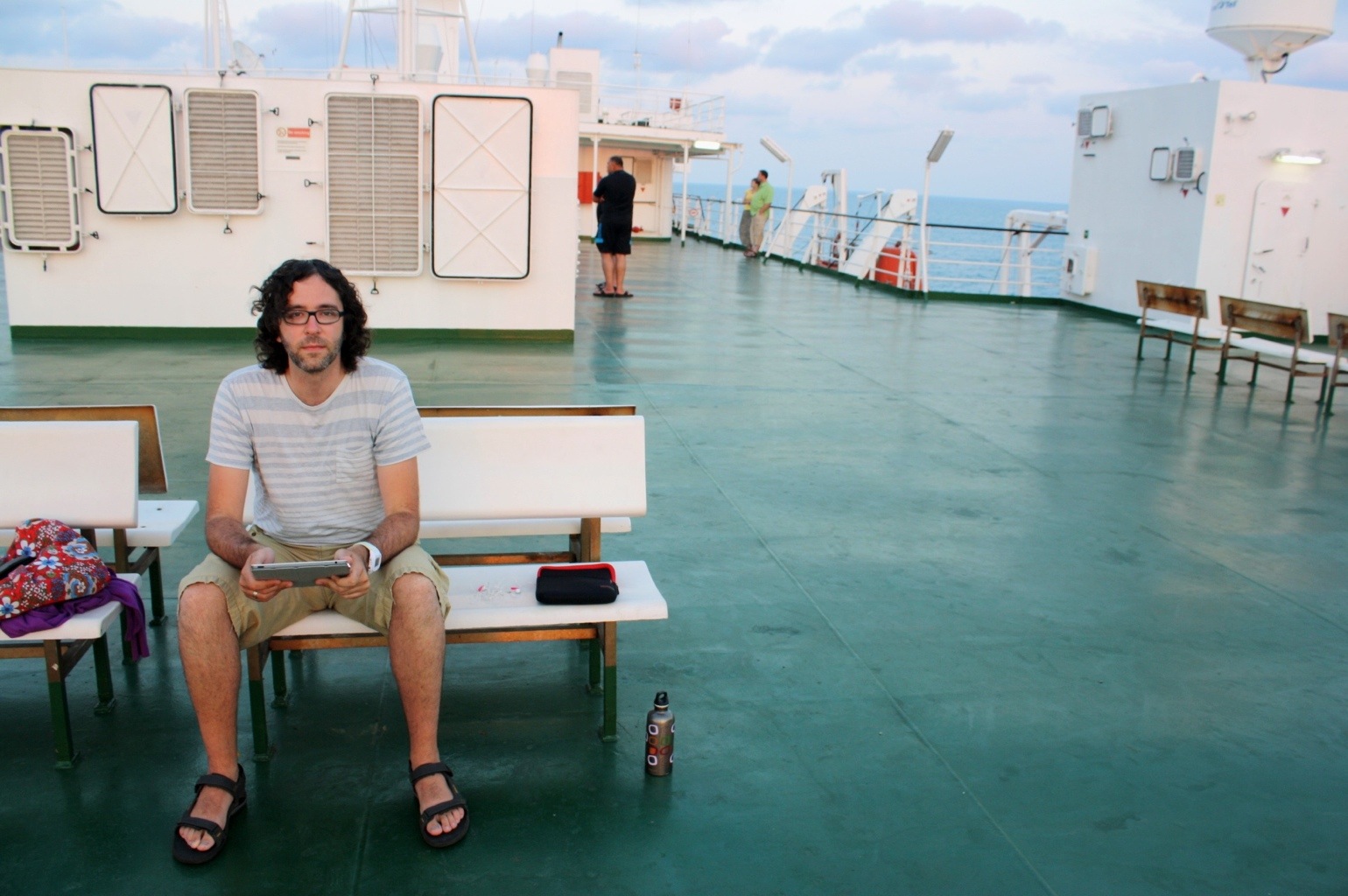 At night we would hit up the bar with other international passengers and truck drivers. The usual suspects at the bar in the evening were the same two German women, a Czech guy, two Lithuanian guys, who immediately informed me that they really dislike Russians (can’t blame them given our history), a Swiss couple, two German truck drivers and usually a group of Georgian truck drivers, who were most difficult to communicate with given their non-existent English and limited Russian.

Table #15
The two German girls were assigned the same table as us. After I translated the check-in information to them, the lady at the reception decided that it would be best to seat them by me. She also gave them the room next to us so whenever they had questions or were confused, they could quickly ask me for help. This worked out well – they were very nice and we shared a few travel stories with each other.

The aforementioned Swiss couple was also seated at our table. The tables were definitely segregated: all truck-drivers or all foreigners. Here is a picture of our table: 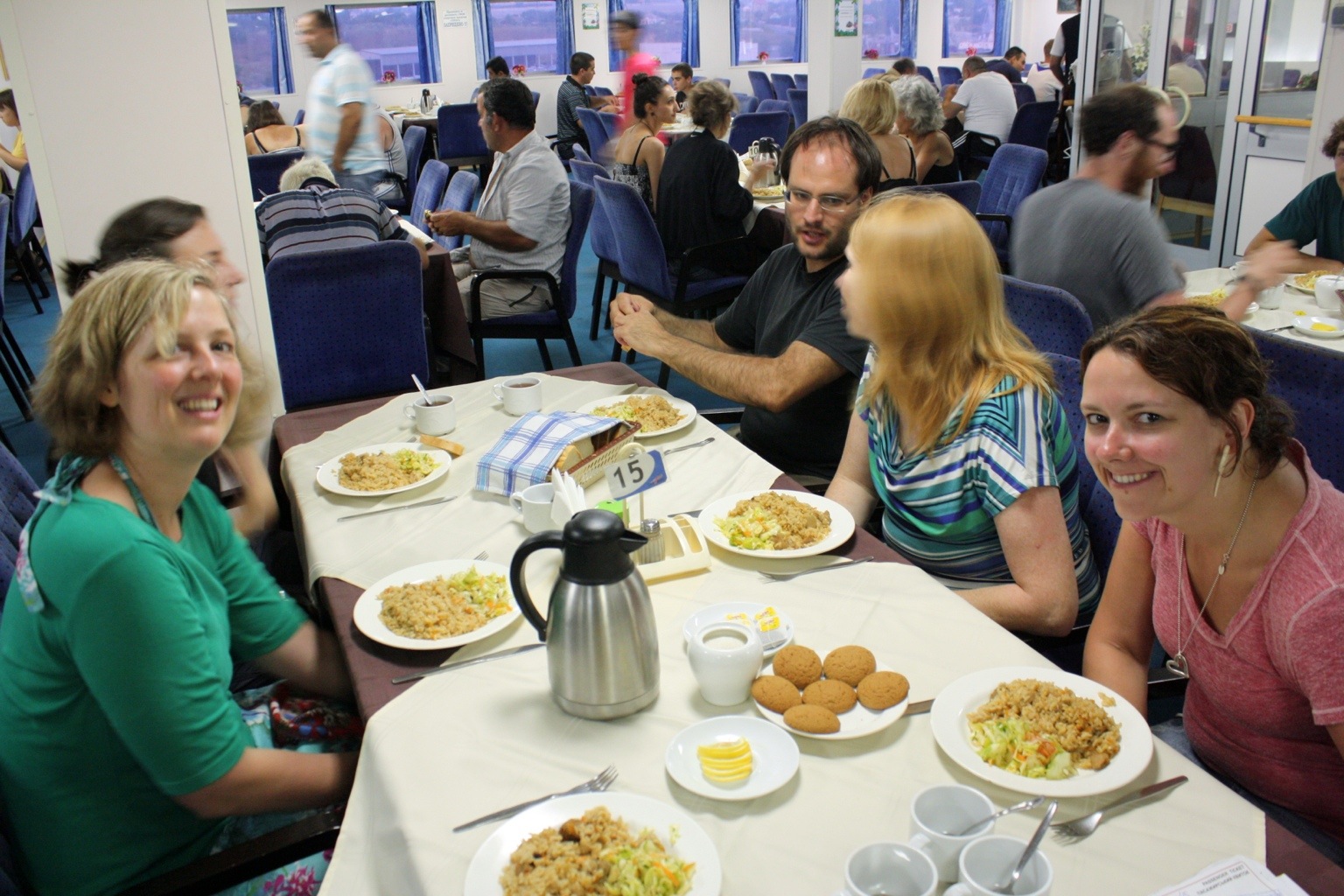 The meals were in no way gourmet or fancy but very filling and in Russian tradition. When we were summoned to breakfast via the loud-speaker at 8:30 am we always got some kind of kasha (Russian porridge), usually some type of breakfast dish with eggs, breakfast meat and a piece of fruit. Lunch, the biggest meal of the day, was served at 1pm and would always start with a soup, be followed by a hot dish with a side of small salad. Dinner was at 6 pm and would consist of a hot dish and end in tea with cookies. The menu for each day was posted in Russian in the corner of the restaurant.

Arrival at our destination – Batumi port
They say:

“It’s not the destination, it’s the journey”,

which proved to be faulty during our amusing ferry experience to Batumi. The journey was definitely worth the breathtaking views that unfolded before us as we were approaching our destination: 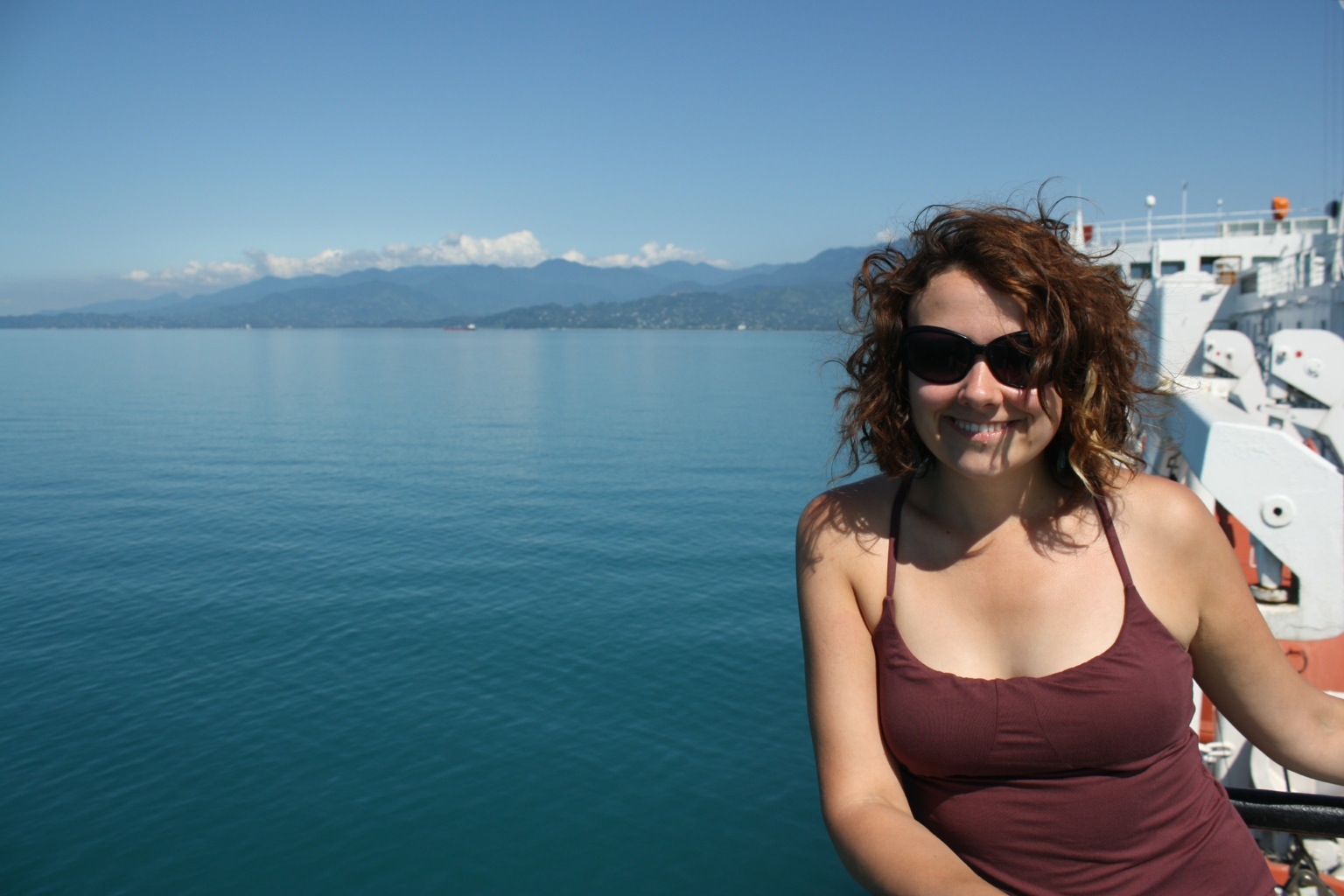 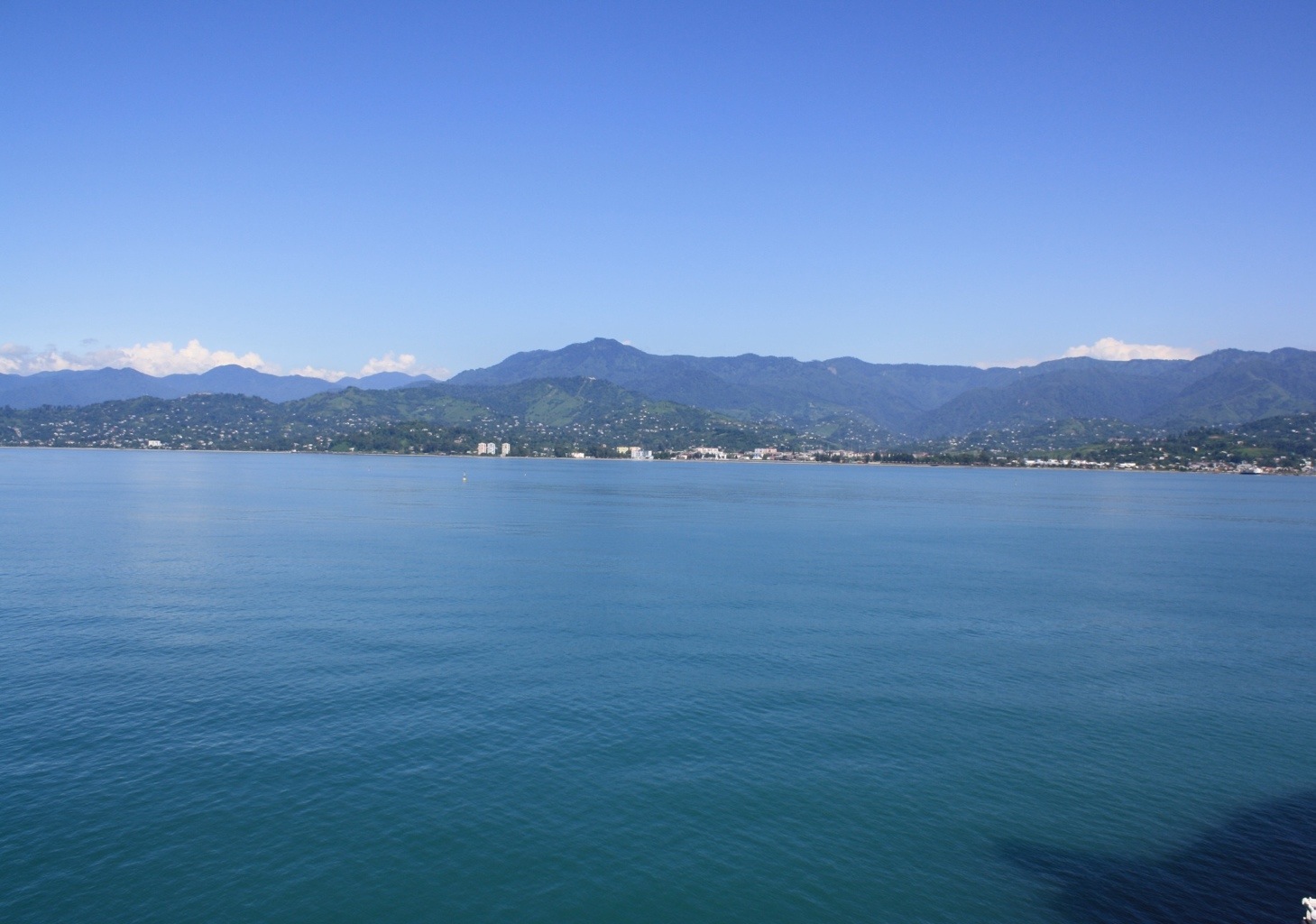 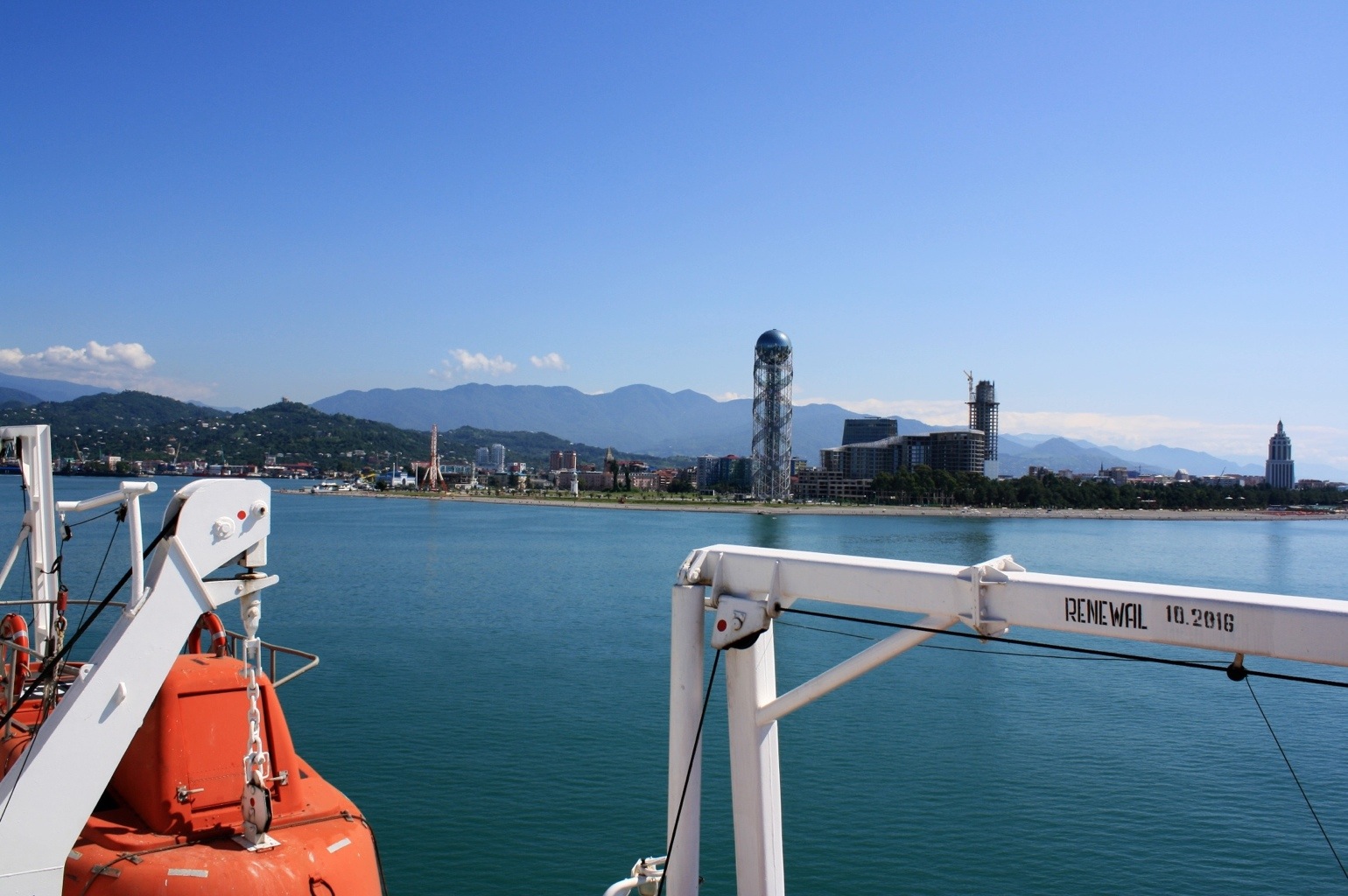 Another treat were dolphins who were greeting us as we were getting closer and closer to Batumi. Dolphins frolicing in Batumi harbor all year round, have become the integral a part this resort city. Hence the city symbol is the Dolphin with a palm branch.

After the boat docked, came a tedious disembarkation process. We had to wait a couple of hours on the boat after docking to go through Georgian customs. Georgian police officers at customs were much more efficient and as we heard from other Georgians, not corrupt at all so once they actually sat-up, we were out of there in a jiffy.