The Backwaters of Kerala

An absolute must in India: renting a houseboat on the backwaters of Kerala. This is, bar none, the most relaxing experience I’ve had anywhere in the world. Even if you’re not much of a fan of India, you will enjoy this. Seriously. Just have a look at these pictures. 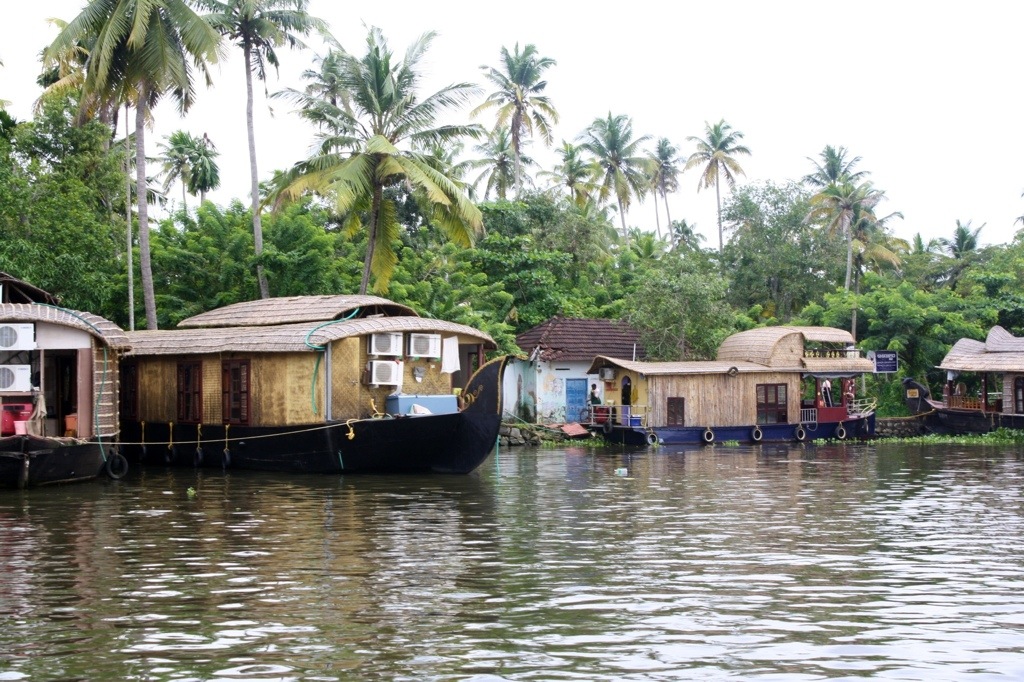 The backwaters, a huge system of canals and lagoons, were the most beautiful part of India that we saw. It’s very interesting to see how entwined the locals are with the waters. It’s their means of life; they drink it, bathe in it, travel on it, and fish in it.

The houseboats, called kettuvallam, are converted rice barges usually having 1-3 bedrooms each. The available boats are all lined up in Alleppy at the “Starting Point” (which also happens to be the “Ending Point”). Taking a taxi here makes it easy – all the drivers know exactly what you’re talking about when you tell them you want to go there.

While this whole set up is by no means cheap, it is worth every penny you’ll spend – starting around 5500 Rupees per night (about $120) during the low season. At a minimum, there will be a cook and a captain along for the ride. They’ll serve you three tasty meals per day and idle around the backwaters while you’re not eating. 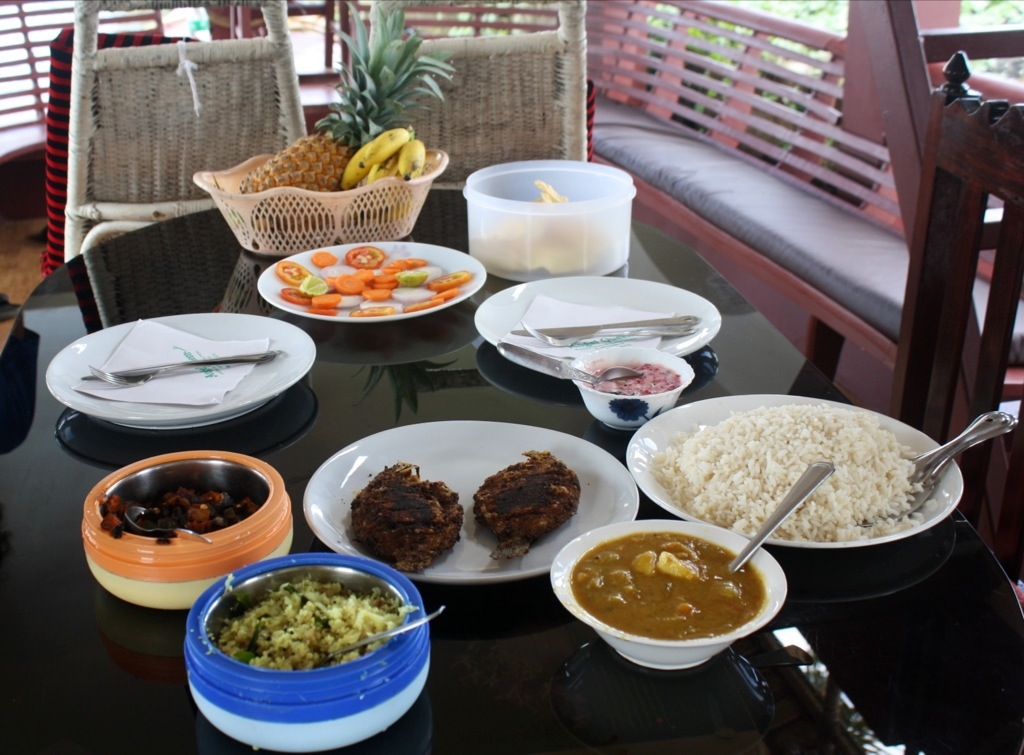 The meals are included in the price and are pretty good portions. They will offer to cook more for you if you buy it along the way. We bought fresh prawns for dinner each night, which were spectacular cooked in a chili garlic sauce. The prawns run about 1000 Rupees per kilo. These things are huge, so just two of them will be a kilo. 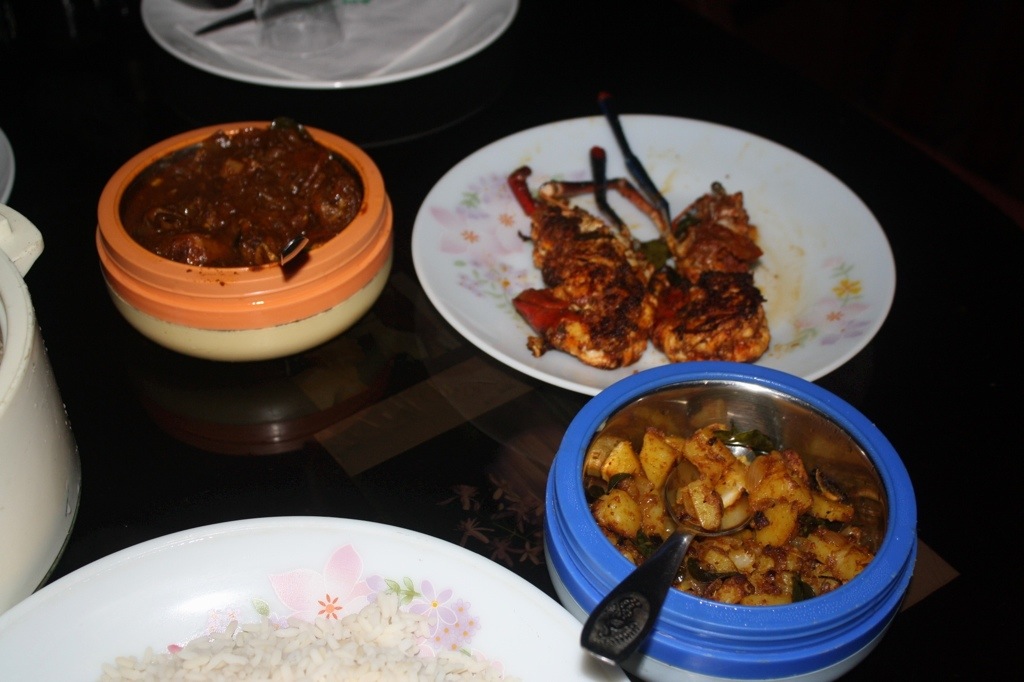 It is possible to book in advance, but it is worth waiting so you can see the boat yourself. It’s best to arrive early in the morning of the day you’d like to spend on the boat. Your time on the boat generally is from 11 am until 10 am the following morning. However, it’s best to arrive around 8:30 am and start taking a look at some of the boats (the best ones are booked by 9 or 10 am).

Because you’ll be arriving without a reservation, you might be stuck with your bags. I wish we had stayed in Alleppy the night before so we could have left our bags at the hotel while finding a boat and bargaining. Trust me, you don’t want to be lugging your bag around the Starting Point, it’s got a narrow, dirt path, which is a nasty, swampy hell in monsoon season. I was soaked in sweat, had mud on my pants, and cut my pinky toe on some ragged rebar. Not fun.

Be prepared to hop on board and check out (at least) 2-3 boats to compare. While it’s possible to negotiate, they have a limit and it’s hard. Even during monsoon season we were only able to negotiate from 5500 Rupees per night down to 5000 Rupees per night for two nights. Some boats also have an upper deck for sitting – I would highly recommend it. We loved sitting there and staring off into space for two days straight. 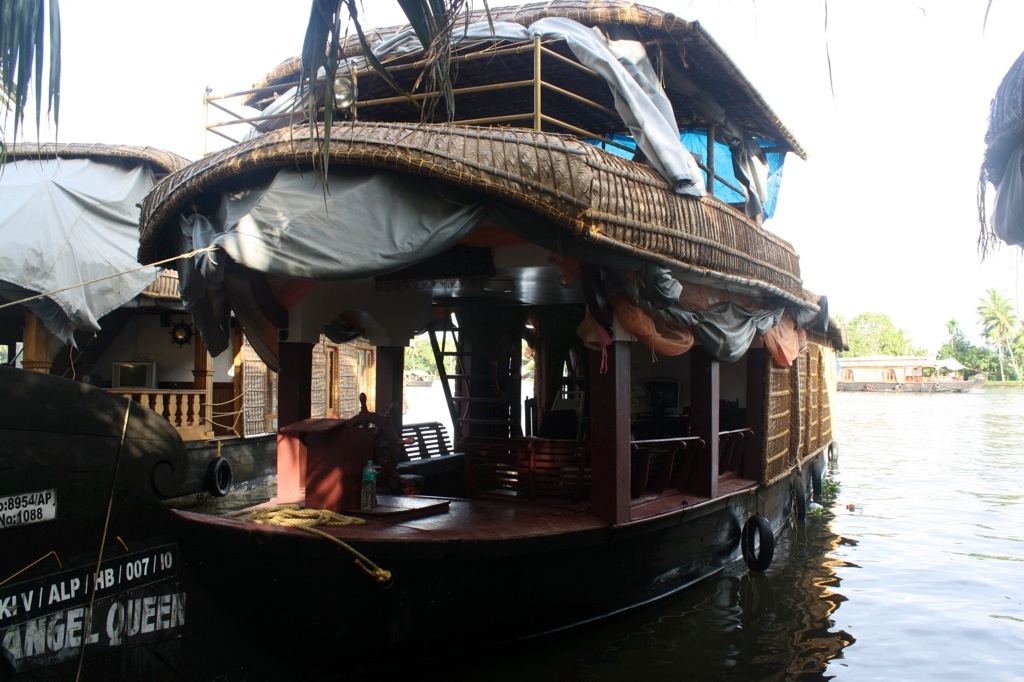 We went with the no A/C option, which is the cheapest by far (just make sure you have a working fan before making a deal). Having A/C in your bedroom will effectively double your price. There are more modern boats that also have an enclosed dining/seating area with A/C available. We had no problems with our boat, which just had mosquito netting around the dining and sitting areas.

Consider bringing a mosquito net for your bed on the boat – there are lots of bugs out on the backwaters. While it’s possible to buy a mosquito net in India, it’s better to buy one back home and bring it with you. We bought a cheap one at a market in Goa for 400 Rupees, but it has six hanging points and it was barely tall enough to tuck under the mattress.

Make sure your drinking water is included in your price. It seems that most do, but it’s best to make sure yours does. If you’re wanting to drink beer, it may be best to bring your own on board. However, we didn’t because we were carrying our bags and beer is a bit hard to come by in Kerala. We just asked them to take us to buy some. While not cheap, it is possible to buy some (it seems to be black market) at a relatively high price at the various shops along the waters. It is also possible to buy some toddy, some local hooch made from coconuts for about 1000 Rupees.

The owners of the boat keep a significant portion of the profit. The on-board staff slept out on the deck at night and have their own tiny, dirty bathroom on the back of the boat. We felt it was only right to tip them as we were leaving. We gave each of them 800 Rupees and they really appreciated it.

Check out the Globe Trotter Girls’ excellent posts about houseboats on the backwaters: