Our initial research on traveling over land to Lviv showed that it could be quite challenging. While the distance from Krakow to Lviv is only a little over 200 km, it takes a bit of time to get there by land. The border crossing is notorious for being slow due to smugglers.

From Krakow, we opted to take a train to the border town of Przemyśl. From there we would take a bus across the border and on to Lviv.

We arrived at Krakow’s Central Station around 9 am, just missing a train to Przemyśl. There wasn’t much information around, so we found a ticket kiosk and purchased a ticket for the next train, which left just before 11 am. We were surprised to find the train quite empty and ended up sharing a cabin with an older woman.

On an otherwise uneventful train ride, when the conductor came through to check tickets it became clear that we had purchased the wrong tickets. In some mish-mash of broken Polish, Russian, and English we found out that we would have to purchase new tickets and then get a (partial) refund on the original ones once we arrived in Przemyśl. Luckily, the conductor wrote us a note to get our refund.

Once we arrived in Przemyśl, we quickly collected our refund and we had a short walk to the main bus station. We were able to purchase bus tickets for 50 PLN but had to wait just over an hour for the next bus. It started raining and we were getting hungry – luckily there was a little kebab restaurant in the station.

About 20 minutes before we were scheduled to leave, we walked out to find our bus. And found this: 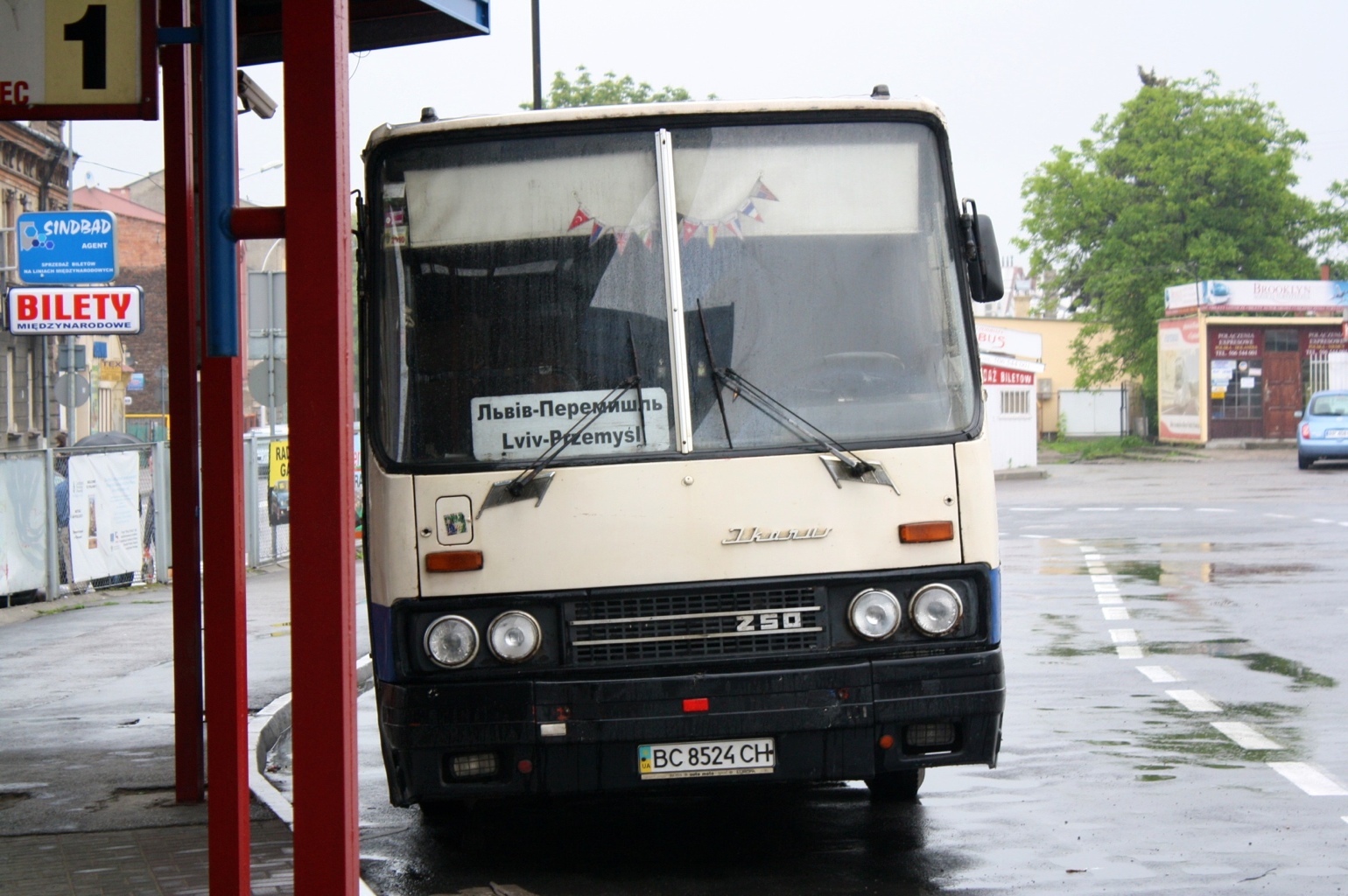 This thing was an experience, to say the least. There was a heavy smell of motor oil – there were holes in the walls – rain was dripping from where the vents once were – the seats were ripped to shreds and were unstable.

Just when we thought this couldn’t get any worse… Five minutes on the road and we’re pulled over. After about 15 minutes of conversing with the cop, the driver just hops back in and hits the road again. We still don’t really know what happened for sure, but more than likely there was some kind of equipment violation and it’s possible there was some sort of bribe involved to keep this thing on the road.

After a short ride to the border, we were parked in traffic for about an hour. Once we were moving again, it was a slow and steady pace through customs. Luckily, there wasn’t much of a problem getting through and we were on our way after about three hours at the border crossing.

By this time it was getting quite dark and was raining again. The bus couldn’t go more than probably 35 miles per hour and we were running short on time – we had to check-in at our hostel before midnight.

If you choose to take the bus, be sure not to drink too much water beforehand – there are no stops during the long ride.

We finally arrived at the Lviv station around 11:30 pm, so we quickly negotiated a cab ride to the hostel. Since we were in such a hurry and weren’t quite sure where we needed to go, we ended up paying 10 Euro for a 15-minute ride.

We really lucked out with our hostel booking in Lviv. The place had only opened about a month prior and didn’t have any reviews. The price was cheap and most hostels were full because of the Euro 2012 Tournament.

After the cab driver took us to the wrong hostel, we barely found ours in time. The (only) very small sign for the hostel:

Minutes before midnight we were able to check-in. At the end of a very long day of travel, we were very pleased to find our room.

Notes on Crossing the Border

Which route you choose to take is mostly dependent on how much of an adventure (stress) you’re up for. If all of these sound too difficult for you, then take a look at flying. Polish airlines have some very cheap flights these days.

There are three ways to cross the border over land: